RONNIE PARKES
​(BONFIRE)
​In 2020 Bass, My Fever staff decided to enter in contact with Ronnie Parkes the bass player of Bonfire since 2015 so as to ask him an interview as melodic (particularly german) rock great enthusiasts.
Ronnie agreed to talk about “Fistful Of Fire” released in those days and to describe his experience in the band as well as his musical influences.
Anyway as is known and obvious to say, pandemic has delayed the publication of this interview by almost two years. Clearly we apologise to Ronnie himself whom we want to thanks and naturally to all of our readers.
Moreover we must remember that Bonfire, who were sorry to not having brought in tour their previous album, have however released on AFM Records the double box set “Roots”, which is to say a meritorious and wide reinterpretative activity of their robust repertoire (spread over 35 years of career) in a semi-unplugged format by adding five bonus tracks (never released before). This confirms that the band has settled to the highest levels as regards composition and performance with a range of sound acting as a trade mark and guarantee. 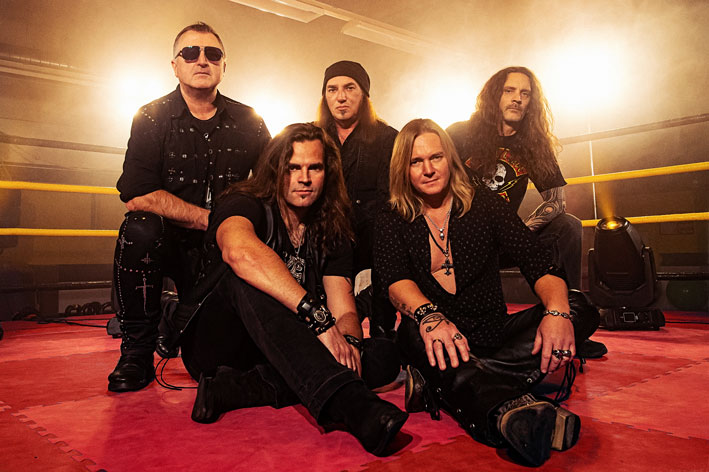 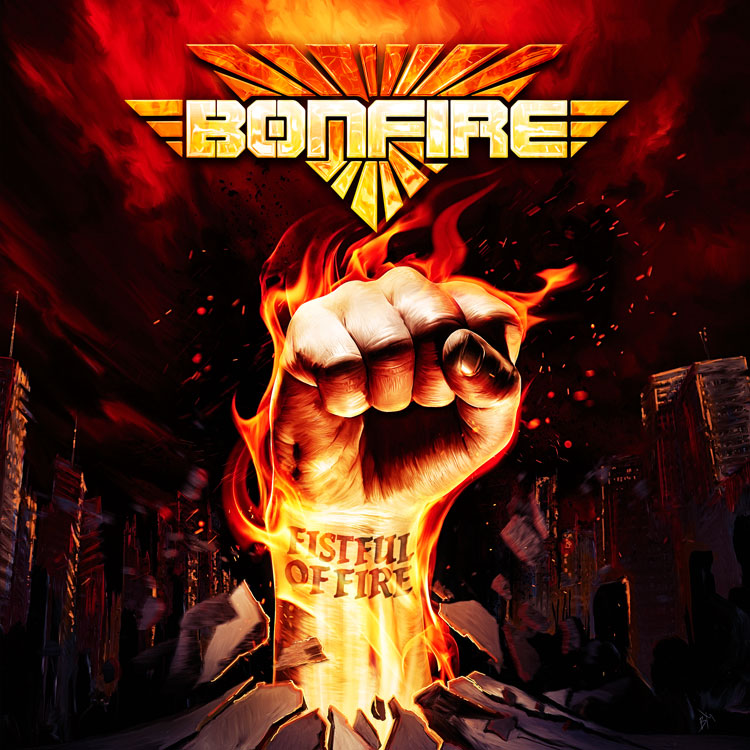 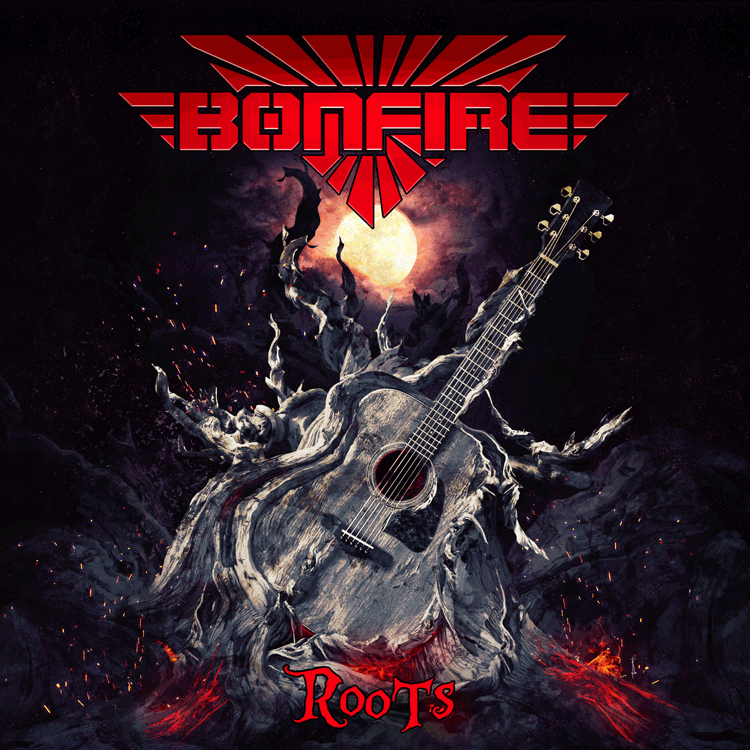 But what is surprising in the new approach of the classical tracks on “Roots” is that all the songs don’t loose their melodic power but revised through those new versions, they make it easier to be rediscovered and enjooyed through a different listening. We are always on the side of high-class and an indisputable performing skill. Ronnie Parkes is clearly a piece of the action with his usual precision and strength.
We warmly advise you to buy this album released on double red vinyl edition which is of  high-impact design.
And speaking of records we want to publicly thank Pio Benvenga that is to say one of the last and authentic record seller left on the planet and our “pusher” of vinyls who was able to recover some preccious albums of the band.
Good reading and thanks again to Ronnie Pakes and Bonfire!

BMF: Would you talk about your beginnings and your choice to play electric bass?

Ronnie Parkes: I started playing guitar and piano at the age of 5 and played guitar as a lead guitar player in some bands for about 30 years. My brother is also a singer and musician and asked me to play bass in his band and I accepted the challenge. I worked really hard to get a good understanding of the bass. Not to just play it like a guitar player and the guitar player mentality of it just being a guitar with only 4 strings. So I worked at it and never looked back. I still play guitar of course, but now bass is my main instrument.

BMF: How was your collaboration with Bonfire born?

RP: I was playing in a few bands on KIVEL Records and David Reece was one of the singers in one of the bands. We became friends and he told me he wanted to make a new solo record and I offered to help him. I got a lot of other people involved and helped him to form his solo band and became the band musical director. I did a lot of things for him. He said the next call I get I will take you with me. The next call he got was from Hans Ziller to be in Hans’s solo band EZ Livin. That is how it all started.
BMF: Which are the bassists who mostly inspired you? And focusing on hard rock, which bassists do you love most? And generally which bands have been essential to make you approach the genre that you play currently?

RP: The most inspiring thing as a bass player was an interview I read from Pete Townsend on the great John Entwistle. He said when John started playing bass there really was no electric bass. It hadn’t even been invented yet. So basically that meant the way John looked at the bass there really was no rule for electric bass in a rock and roll band.  That basically tells me there still is really no rules. The bass is such an amazing instrument. When writing the songs the bass can totally change the feel of the song and make it anyway the bass dictates. Just the simple fact of playing quarter notes, half notes, triplets, sixteenth notes will completely make the feel and groove of the song, and that is not even talking about note choices or some kind of counter bass line like Bon Jovi “Living on a Prayer”. Without that bass line the song would no way be the same. So i kind of live by that rule , there is no rules and the song comes before my wanting to do a bass solo or overplay. It is all about what the song calls for. I like all kinds of music from Raggae to Metal and everything in between. But my early inspirations were Kiss, AC/DC, Iron Maiden, Judas Priest.

BMF: Would you like to tell our readers about "Fistful Of Fire", the related compositional process…

RP: We are really happy the way "Fistful of Fire" turned out. The normal writing process for Bonfire is Hans lets everyone in the band submit demo songs, then we pick the songs we will record. Then I write melodies with Hans and I write the lyrics. Then Hans is the producer and makes changes or adds things where he thinks necessary.
BMF: What about the gear used during the recording of the album? Would you talk about your current gear, in general?

RP: When recording I go direct to the interface with a good D.I. box. There are many on the market,  Sans Amp make a good one. Live I am endorsed by Laney Amplification I use A Nexus SL head with a 4x10 cabinet and 1 x 15 cabinet. I find 4x10 cabinets to be the best. They have great punch and also the low frequency. For the bass itself I am endorsed by ESH and use the 5 string Sovereign model. It’s a great bass and very versatile. I also own a few Musicman Stingrays.

BMF: What’s your relationship with fretless? Many bassists gravitating around hard rock don’t like it very much – with the exceptions of Tony Franklin and few others – and they play it mainly on power ballads…

RP: I do have a fretless and used it on one recording, but I prefer the frets. To me the fretless sound gets old very fast. It definitely has its uses but I prefer a bass that can just get the right tone. Fretless just doesn’t have enough attack for me. More power to Tony Franklin he does always make it sound good. 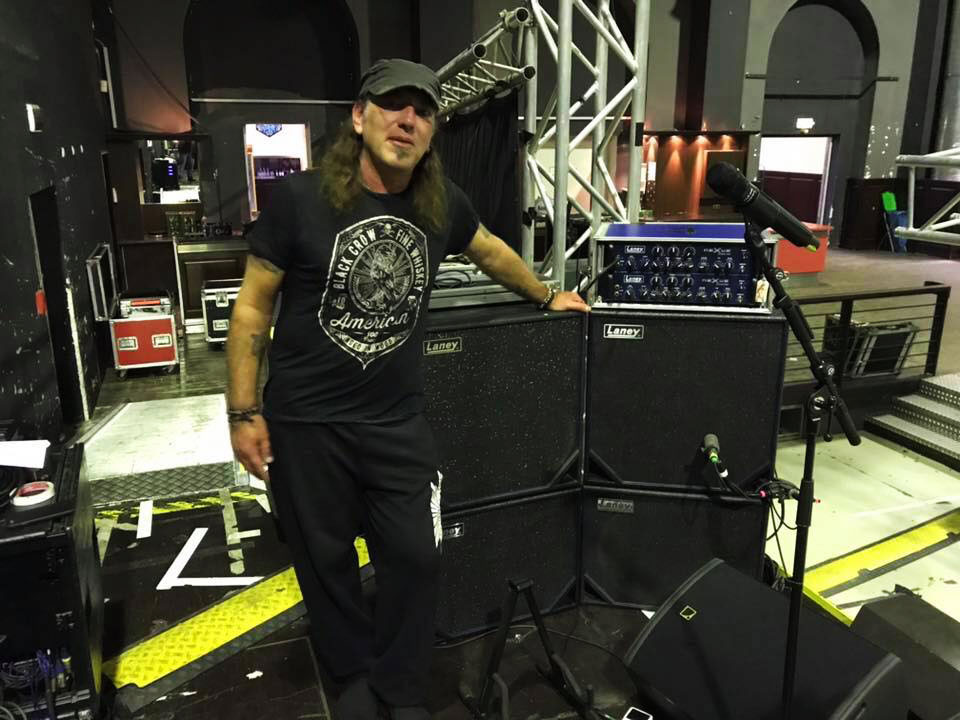 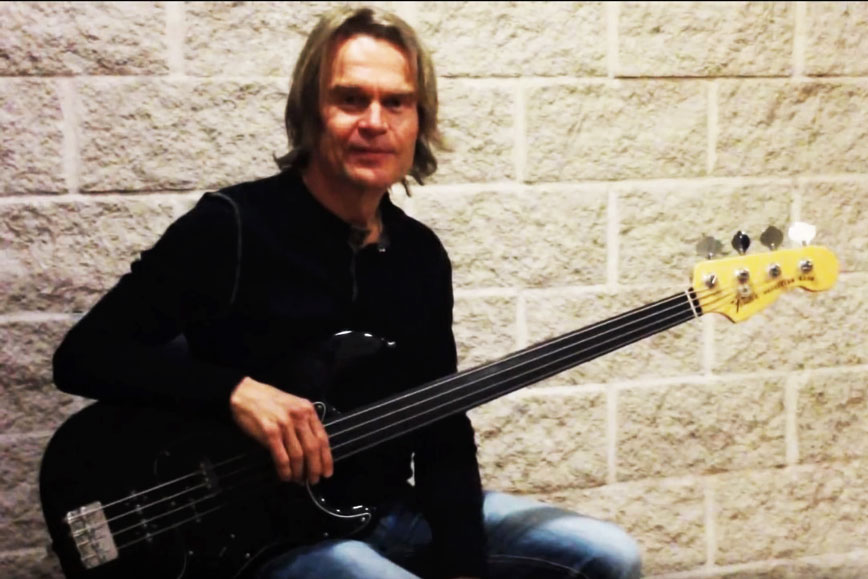 Tony Franklin
BMF: What are the plans of yours and your band for this 2020 so heavily conditioned by coronavirus pandemic?

RP: This is an year will definitely go down in history as the worst year ever for live music. It’s actually not possible!! Who would have thought of that? I am currently in the USA and the rest of the band is in Germany. So it is impossible for me to even go there at the moment. We are in the middle of recording an acoustic album as we speak. I am doing my bass parts at home here and then everything gets sent to the studio in Germany and it all gets put together there.

BMF: Do you think that a future might be possible for physical support or music is bound to be more and more liquid as well as immaterial? Do you believe in the growth of vinyl? And what’s your opinion about the potential comeback of audiotapes?

RP: Yes I really believe 2021 everything will come back. Live performances and festivals. With every release we now also have LP’s available it is a really big thing for audiophiles. They do have a certain sound. But I don’t see audio tapes catching on as a thing. Too much maintenance and knowledge needed for the non tech savy, average music purchaser.